Video #11 in the Finance Storyteller series, one that affects business travel in many corporations: the Q4 travel freeze! Is it worth implementing it, to emphasize cost-consciousness? Or does it do more harm than good? Find out the pros and cons in the video below. 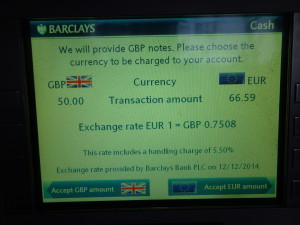 While other airlines only send lame e-mails with offers to book a car or hotel connected to your flight, Etihad has a more exciting question: would you like to bid for an upgrade to business class? If you bought an economy class ticket, Etihad will “auction” upgrades to business class for each leg of your journey. The process is in three easy steps: make an offer using a slider that indicates the offer strength, enter credit card details, review and submit. The airline will then notify you via e-mail if the upgrade request has been approved (and only then charge you). 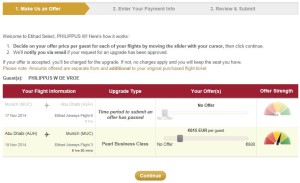 Easy to use, and I would gladly participate if I could make a token low bid of let’s say €100 or €200 with a 10% or 20% probability that I would be lucky enough to get a seat. In other words, a “small investment, huge pay-off” bet. An offer strength indicator indicates the range of past successful offers for similar flights. Unfortunately, in my case, the slider tool does not allow a bid below €560 per leg, which would get me into the “red” category (this translates to me as: unlikely to be accepted). Starting at €595, you get into the “yellow” category (suggesting you have some chance of acceptance), and starting at €765 you are in solid dark “green” (suggesting it is highly likely that the bid will be accepted).

Frequent travelers have posted tips for successful bidding on the internet, such as:

Given that my original economy ticket was €988 roundtrip, I am not feeling I get a good “deal” here, as an economy ticket plus two upgrade bids would not be significantly cheaper than booking a business class ticket from the start.

In short: I love the concept, a nice incremental business model that could generate a good amount of additional revenue for Etihad by getting already “captive” economy passengers into those empty business class seats, but the deal has to make the customer feel he “wins” as well versus walking up to the ticket desk at the airport and buying an upgrade there.