Ancient business wisdom says “What gets measured gets done”. Business leaders and financial executives have used this heuristic to design and implement key performance indicators that link to the company’s strategy. A related rule of thumb is that it’s only fair to measure people on things they can influence.

But does and should the opposite also apply? “What does not get measured, does not get done”? Logically speaking, maybe that should be the case, and many employees seem to implicitly use this statement to justify not taking certain actions (“if it is not measured, then it doesn’t help me on my performance review, or get me a bigger bonus, and it isn’t worth doing”). However, this assumes that the key performance indicators have been correctly chosen by the company, are fair indicators of the company’s success, and that everything that is truly important can be (numerically) measured.

In my view, we should look to moral philosophy for guidance, rather than business literature. Jeremy Bentham and John Stuart Mill held the view that “the moral worth of an action is determined by its outcome” (utilitarianism, consequentialism). Immanuel Kant disliked this utilitarian approach, as good consequences could arise by accident from an action that was motivated by a desire to cause harm to an innocent person, and bad consequences could arise from an action that was well-motivated. Instead, Kant proposes to focus on principles: “There are principles that are intrinsically valid; they are good in and of themselves; they must be obeyed in all, and by all, situations and circumstances”.

Based on Kant’s principle-based ethics, I would reject the “What does not get measured, does not get done” viewpoint. Some fundamental principles of doing the right things (leadership), doing things right (execution excellence) and doing right (integrity), cannot necessarily be fully measured by key performance indicators in a utilitarian way. There’s definitely a context to what we do in business…. 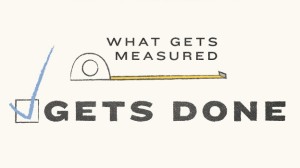