A short reflection on the beauty of the British Pound.

Well, not really on the currency itself: I used to encourage the Brits to actually give up the British Pound and join the Euro, as their economy is closely interrelated with that of the rest of Europe and a joint currency might facilitate trade, but after studying the great works of Nassim Taleb (“The Black Swan”, “Antifragile”) I have become more skeptical about fragile complex systems we do not understand (like the Euro) that might have many unwanted side effects. So let me proclaim myself to be an agnostic on the question whether the Brits should continue to use the British Pound. 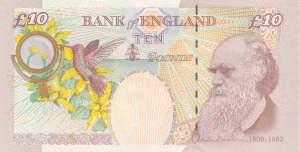 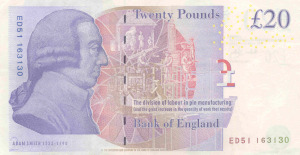 Rather, I would like to reflect in this article on the beauty of the British Pound banknotes, in particular the back side of them. Each is graced with a portrait of a great British scholar: the £10 note with Charles Darwin (1809-1882), and the £20 note with Adam Smith (1723-1790). I am disappointed that Smith got to be on the £20 note and Darwin “only” got the £10 note, as I deem the scientific impact and reach of Darwin’s ideas far more noteworthy than those of Smith (even though I studied economics myself, rather than biology). Not only does Adam Smith get to be on a note of higher nominal value, there are also many more £20 notes (1.8 billion) than £10 notes (700 million) in circulation. So who wins the popularity contest? I think neither of them would have cared, if they were still alive. The amusing thing is that Adam Smith was a Scottish economist, the first Scot to appear on an English note.

The beauty of having these two scholars on the British Pound notes is that they teach us a similar concept: Darwin’s discovery of the mechanisms underlying evolution, and Smith’s discovery of the mechanisms of wealth creation. To simplify and summarize matters greatly: one of Darwin’s key propositions is that those organisms that are best adapted to their environment have greater chances of survival, one of Smith’s is that division of labour in manufacturing causes a great increase in the quantity of work that results. In short: adaptation and specialization, concepts that have significant applicability in the area of business strategy, as well as career planning. Are you (and/or your company) working on those things that you are technically competent at, that you enjoy doing, and that pay reasonably well? If so, your earnings potential, your job satisfaction, and “chances of survival” (in a dynamic and turbulent economy, with lots of companies going bankrupt, and jobs under threat of restructuring) are likely to be higher. Those are the questions that I contemplate every time I have British Pound banknotes in my hands. Good triggers for reflection. I am lucky to visit the UK on a regular basis, and use its analogue currency whenever I can. Adam Smith will be around on the £20 note for many more years, as “his” £20 note was issued in 2007 as part of “Series F”. Charles Darwin will sadly be replaced by Jane Austen in 2017 on the £10 note, but has had a long run in circulation since 2000.